Let’s talk about this past week, shall we?

It. Was. LONG! But guess what? It’s over! Even though I felt exhausted waking up just about every day this week, I couldn’t help but appreciate the beauty of the sunrise on my morning runs. I have the best views from the paths behind my condo. I usually hate having to stop at any point during a run, but I just had to take a picture of this.

Loveitsomuch.
I also have fallen in love with these dark chocolate caramels from Trader Joe’s that I first saw via Jenny’s twitter feed last week. 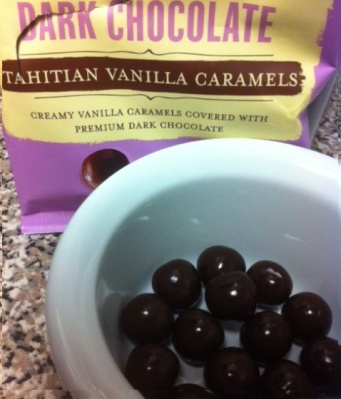 The bag was small and I thought it might leave me wanting more, but I have actually made it last a couple of days. Eating just three or four chocolates at a time went a long way. And that’s saying a lot coming from me. But, to be completely honest, popping a few of these for dessert mostly came alongside a cookie or ice cream too 🙂
Another newfound Trader Joe’s item for me are their veggie burgers. 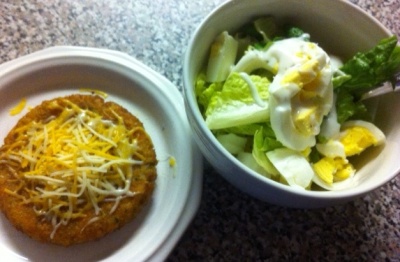 The first burger I made this week I ate on a bun with a slice of cheese and lettuce. I had another one the following night and decided to pretend like I’m watching my carbs by skipping the bun. I topped it with some shredded cheese and had a salad with boiled egg on the side.
I don’t love these, but they aren’t bad by any means. If you have never had a veggie burger (which I hadn’t) the first bite is a bit of a surprise. I think I just had in my mind that it was supposed to at least somewhat be similar to a beef burger. Not only do these taste completely different, but the texture was different too. These are much softer and weaker (for lack of a better word) than beef or turkey burgers. It sort of fell apart if I tried to lift it up with the fork.
Greg and I were both more than ready to wind down last night with some quality couch and tv time. But before that, we had ourselves a date at Umi Japanese Restaurant. We have been once before, as seen here, and I was excited to try a new sushi roll.

Greg has never cared to try sushi much before, but wanted to give it a go for his appetizer. He ordered the Spicy Shrimp Cucumber Roll, but did not like it one bit. That was fine with me, because I thought it was delicious. I ordered the Salmon Avocado Roll and a side of vegetables for my dinner. The salmon was okay, but a little too much for me. The texture creeped me out a little. The Spicy Shrimp on the other hand is probably my favorite sushi. Now that I have sushi more than just a couple of times, I think it’s perfectly okay to proclaim a favorite.
Side note-Wanna hear a funny story? I just went back to look at my blog post about our first trip to Umi and realized I had the Spicy Shrimp Cucumber roll then too! I feel really stupid now, because I did not remember what I had before. I also had said I thought I could handle something with a stronger sushi flavor, but I guess I was wrong!

After dinner it was time for none other than Menchie’s! It was too convenient on our way home not to go. And with a BOGO coupon in my wallet, I was ready to fill up.

I usually stick with just one or two flavors and go with fruit toppings, but after trying a sample of the peanut butter, my decision became more difficult. I hope my flavors didn’t feel too segregated in the bowl, but I couldn’t decide on just one theme.  An imaginary line divided the peanut butter and chocolate yogurt topped with peanut butter cups from the cheesecake and vanilla topped with strawberries on the other side.
It was a great end to a busy week and I’m looking forward to spending the rest of the weekend with Greg’s parents who are visiting us!
Hope you all have a good day!